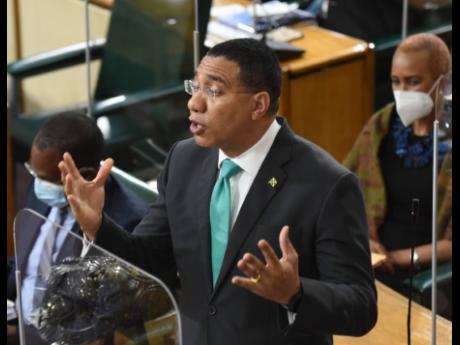 Prime Minister Andrew Holness making his contribution to the 2021-22 Budget Debate in Parliament on Thursday.

Two additional communities are on the cusp of being declared Zones of Special Operation (ZOSO) as the Government struggles to tame crime.

Prime Minister Andrew Holness, who made the disclosure on Thursday, said that some communities were at war with each other having been captured by gangs that operated like militias.

“The levels of crime, in particular shootings and resultant murders, are well above the norm for countries at peace where conventional policing and law enforcement measures can be applied,” Holness contended as he addressed the issue in his Budget Debate presentation.

Holness said the ZOSO and the state of public emergency (SOE) as intervention measures were designed to bring peace to residents who were living in fear. He expressed frustration that SOEs had been opposed by the parliamentary Opposition.

“So, when the leader of the opposition opposes the SOEs, he is opposing an effective tool that has brought peace to communities in a structured way,” said the prime minister while reiterating that the Government had challenged a ruling by the Supreme Court on detentions during states of emergency.

“We are not trying to use extraordinary powers to abuse the people of Jamaica. Nobody can say that about the SOEs!” Holness lashed out in frustration.

He charged, too, that the SOEs had been opposed for political reasons.

“For what reason? To just come here to show a graph and say ‘crime went down in mine and it went up in yours’?

“Whenever a measure is working, we should unite and say ‘let us support it’,” Holness urged.

The prime minister argued that crime should not only be seen as a police problem.

“It is not only a police problem, but the magnitude of the problem also suggests a nation at war,” he declared.

“What can you say about a community arming little boys and telling them ‘if anybody come cross the road, shoot them!’. You tell me what that is other than a war. And how do you stop that?”

He said that police were being set up to fight wars and to commit extrajudicial killings.

“The most pressing matter of concern for most Jamaicans regarding our sense of security is the murder rate and its seemingly intractable nature. We can report that we ended 2020 with fewer murders than the previous year and since 2018, we have essentially flattened the murder curve,” Holness stated as he vowed not to be deterred.

Rastafarian lines up to take jab

Heat on Wright over beating video

Antigua and Barbuda offers Condolences on the Passing of HRH Prince…

Antigua and Barbuda offers Condolences on the Passing of…